All of your burning questions answered: An interview with directors Sarah Lemanski and Rebecca Weiss 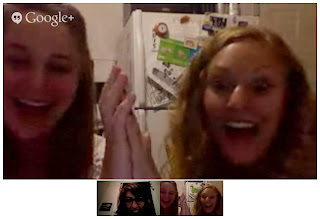 Hello!  The obvious question first.  What is The White Wife, aside to being the title of your series?

Ha! Well it was the title of our first reading. When we were combining the scripts of Othello and Desdemona: A Play About a Handkerchief, they both shared the similar theme of a virginal, innocent wife. By naming our series The White Wife we hope to bring the nuances of this idea to the fore and encourage the audience to focus on gender roles in our society.

Did you envision performing plays in repertory when you first conceived of Spicy Witch Productions or did that decision come later?

It happened pretty organically. We were first and foremost interested in creating roles for women.  We didn’t like the choices we had as female actors, especially in classical repertory where there is an abundance of male roles, but few parts for women. It just made sense for us. It’s particularly interesting to think about what the roles for women were in the time of Shakespeare and how this has changed over time.  Aren’t we often still relegated to the role of wife or mother? Who is the female equivalent of Othello today?

What’s the benefit of performing play in repertory?

Exploring classic plays through a modern lens allows the audience to reflect on how society has, or hasn’t changed—it invites productive discussion. And we love a good discussion!

Back in April when you staged the [funny, captivating] reading for The White Wife, you combined the two plays ‘Othello’ and ‘Desdemona: A Play About a Handkerchief’ and performed them together as one experience.  What was the value in that exercise and what made you decide to perform the plays separately when you went into full production?

We had always planned on performing them separately, but we really wanted to get something going in the spring.  Combining the two plays—it was a great way to start creative


work by actually creating our own work. It was challenging and exciting


to see what we could put together.

Historically when Shakespeare was performed in Elizabethan England, the men played all of the roles, even the female characters.  In your production of Othello, all of the parts will be played by women.  Can you speak to this?

That men played all of the roles--it just highlights how malleable the plays are and speaks to the strength of the [past] audiences imaginations. We’re putting faith in our own audience to be imaginative too.

Sarah, you are playing the role of Iago in Othello, while also directing Desdemona: A Play About a Handkerchief.  Why did you choose to do both?

In the early days, when we were discussing Spicy With Productions in a tiny dressing room, Rebecca had talked about really wanting to do Othello, so we knew she was going to direct it.  For Desdemona, I [Sarah] had never read the play, but we needed a director. And we don’t argue, we fill roles that need to be filled!  So that’s what happened.

What is it like to be both acting and directing?

I don’t get much sleep! Other than that, the scripts are very different though the plot points are the same.  By playing Iago I’ve become very knowledgeable about the Othello script and I can bring that insight to Desdemona.  The inverse of that is though the character Iago isn’t in Desdemona: A Play About a Handkerchief, he is discussed often, and in detail, by the women.  I can bring that knowledge to my character—it gives me different options as an actor.

You’re producing this series in the Lower East Side and consider the LES to be your home base.  First, how do you like the neighborhood?  And is there a difference for the audience seeing a show in the LES versus the Theater District?

The Lower East Side is a wonderful place for theater! The Clemente Soto Vélez Cultural and Educational Center in particular has been very supportive of our project. There’s such a great community of visual and performance artists here and we’re excited to be a part of that.  (Not to mention we love the vegetarian meatball sub at Tiny’s Giant—it’s actor fuel.)

As for how it differs from the Theater District--we think there’s the potential for a more diverse audience here.  We can reach out to people who maybe wouldn’t go see a play in the Theater District, but who would love to see some great theater before heading to Pianos.

You refer to Spicy Witch Productions as actor-driven.  What does that mean to you?

We are all actors, though we both direct and there are other directors in group.  It’s
important to us to change the meaning of the term actor-driven. When we [the founding members] first met in Macbeth we were given the opportunity to invent a lot of what was going to happen onstage.  There was such a collaborative spirit—we weren't just actors carrying out a vision, we were feeding off each other’s ideas. We wanted to bring that creativity and artistic strength to our company.

What other female-driven production companies do you admire?

What’s next for Spicy Witch?  What do you see as the company’s role going forward?

We’re still working on a couple of ideas, but we definitely want to continue pairing plays that are linked. We’d love to do our own contemporary adaptation of The Tempest or commission playwrights to do their own adaptations.

Arts education is also very important to our company.  As a collective, Spicy Witch Productions has extensive experience teaching theater. Two children’s programs are currently in the works for fall with more development to come. Basically, there’s nothing cuter than a 5 year old quoting Shakespeare, so this is a top priority.

Thanks Sarah and Rebecca!

Posted by Unknown at 5:53 AM No comments:

While preparing for Othello rehearsals to begin this week, I’ve been thinking a lot about doubles. Othello is rife with doubles: juxtapositions of black and white, virgin and whore, male and female, Christian and heathen. The ultimate tragic irony of the play is that the characters who are unable to accept the dichotomies in their own nature are doomed to die, while Iago—Shakespeare’s ultimate double-sided villain—survives through the end of the play.

Jealousy is often seen as Othello’s central tragic flaw, but I believe Othello’s inability to accept his own contradictory nature is what truly leads him to murder Desdemona and take his own life. Othello is acutely aware of the fact that others view him as barbaric, an “extravagant and wheeling stranger, “and believes he must at all times act the part of the level-headed, honorable Christian Venetian. His insecurity, his desire to control his emotions, is what makes him such easy prey to Iago.  Iago, on the other hand, is fully at ease with his own double-sided nature and can accept and justify his villainous thoughts simply: “I am not what I am.”

Likewise, Desdemona’s death is a direct result of her sincere need to preserve her honesty and obedience. She cannot imagine being anything but an honest wife. As she tells Iago, “I cannot say 'whore:' It does abhor me now I speak the word.” She cherishes obedience above all else, even when her husband is unfairly accusing her, to the point that when asked who killed her she responds, “Nobody; I myself.” If only Desdemona could accept the capacity to commit infidelity, like her handmaid Emilia, perhaps she would be better equipped to communicate her own innocence.

In our production of Othello, we are focusing on the juxtaposition of male and female as opposing forces in addition to the contrast of light and dark. The qualities that lead to Othello’s demise—rage, jealousy, and anger—are often thought of as inherently masculine, while Desdemona’s characteristics—obedience, chastity, and modesty—are often idealized as the ultimate feminine traits. Iago’s mastery of manipulation through word, coupled with his military and physical prowess puts him in a unique position; he is able to accept masculine and feminine characteristics in himself and use them both to his advantage. By having all of the male roles played by women, we are asking the audience to confront their own assumptions about gender and recognize the masculine and feminine attributes in all of the characters in Othello.

I can’t wait to start rehearsals and see what these unique, intelligent women bring to the table and how the actors in the space will give shape and nuance to these contrasts in the text. And, of course, to see how doing two plays in repertory will highlight the contrasts in the world of Othello. Above all, I can’t wait to share this collaborative process with you: the audience!


Othello will be playing at the The Kabayitos Theatre October 15th-27th.  Buy tickets here or consider donating to The White Wife Series here.

Posted by Unknown at 6:57 PM No comments: